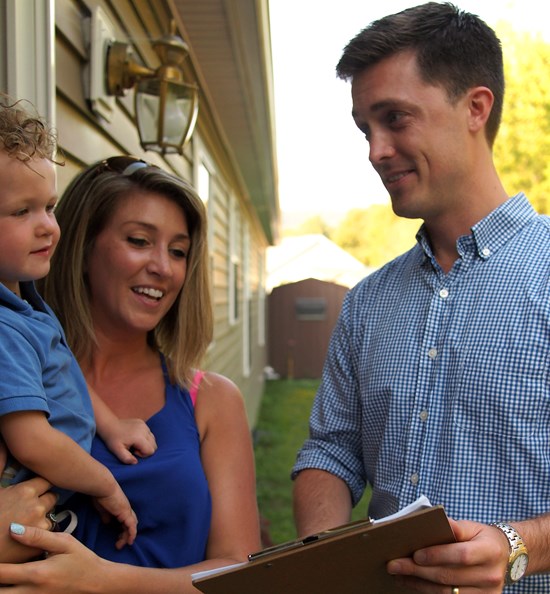 Our Economy: "I grew up in our area and graduated from a local school in 2000. Since then, most of my classmates have left to pursue opportunities elsewhere. We must create a dynamic and modern economy that supports existing industries and attracts new businesses and entrepreneurs so that the graduates of the next generation have the option of staying here and building our future."

-21st Century Infrastructure- We must invest in our broadband, roads, sewer, water, cellular, and clean energy infrastructure to set the stage for future smart growth. The County Board over the past several years has supported increased cellular and broadband connectivity and investments in our bridges and highways.

-Strategic Planning: Andrew voted for new Strategic Plans for the Town and County to ensure smart economic growth that preserves our quality of life and environment. While on the Town Board, he also appointed bi-partisan Planning Board members and encouraged more Town attorney assistance to ensure a flawless and professional planning process, embraced by business.

-Nurture Existing Industries: The County should work to support the primary drivers of our local economy, which include education, medical care, tourism/hospitality, retail, and agriculture, food & beverage. Work with these stakeholders strategically and establish clusters of employers in the same industry.

-Shovel Ready Sites- The first IDA approved shovel-ready site was located in the Town and there are more opportunities. The County Board supported grants for the development of industry in Richfield Springs and for an economic development effort for the entire Interstate-88 corridor.

-Business Expansion- During Andrew's terms there has been business expansion on the Southside, East End, and West End of Town. This includes new businesses and the expansion or relocation of existing local businesses.

-Education: Every year we lose thousands of high school and college graduates to "brain drain". We must invest in our schools and create a job pipeline for our future. These graduates should be our future local taxpayers, business owners, and civic leaders.

Our Environment: "The old Oneonta Town Board suggested that you

couldn't protect our environment and build the economy at the same time.

possible. After years of resistance, we are now bringing our Town's example to Otsego County."

-Fracking Ban- While on the Town Board, Andrew exercised the Board's home rule authority and finally banned fracking and the disposal of fracking waste in the Town in 2014. Town residents supported this ban by a 3-1 margin yet it had been blocked by the previous Board.

-De-Compressor Station: Otsego Now wrongly pursued this project without the support and consultation of the Town and its residents. This potentially dangerous endeavor has no place in the well developed residential West End of the town. Andrew voted to approve the Town's current Comprehensive Plan and zoning in 2014. The area now targeted by outside gas interests was not zoned for that use.

-XNG Trucks: As a member of the Public Safety Committee, Andrew voted to re-route the 80 or so compressed gas trucks driving through our Town each day. Working with the company, the County caused the traffic to move to a more acceptable route, outside our county.

-Protecting Our Water- On the Town Board, Andrew was the Chair of the Watershed Protection District Task Force, which drafted a law to protect public water sources, specifically Wilbur Lake, lower reservoir, and several Town-sited wells. The law was adopted in 2015 with residents' support. The Board has also worked to give Southside businesses and residents the funding and opportunity to create their own public water district, to resolve water contamination issues. The residents and businesses approved the plan in 2015, with the assistance of Andrew's petitioning efforts.

-Road Use Law- On the Town Board, Andrew voted to protect local taxpayers from the road damage created by irresponsible outside developers.

Public Safety: "As an attorney who has spent my career promoting the rule of law, I take public safety very seriously. We must promote the interests of our community by ensuring the effective, equitable, and efficient administration of law enforcement and emergency services."

-Heroin & Opiates: Andrew supports increasing efforts to combat this crisis through law enforcement, treatment, and education. During the past term, the opiate related fatalities have been reduced by about 91%. He has served on the County's opiate task force and supports the County's Drug Treatment Court as well as treatment resources in the county jail. Andrew also voted for the County joining a class-action lawsuit against the big drug companies who largely cause this tragedy. As chair of the Health and Education committee, Andrew works to ensure this issue does not fall of the county's radar.

-Emergency Services: During Andrew's terms, the County opened its new 911 Center and completed the emergency communication towers. Improvements have also been made to the 911 service, allowing for text message emergency contacts. He supports reviews of EMS services and greater county involvement where needed.

-Sheriff Dept.: By and large, the Sheriff Dept. has hard-working and ethical employees but Andrew had grave concerns about the allegations of misconduct and nepotism in that department. No one should be above the law and Andrew joined the bi-partisan Board vote to investigate and address wrongdoing.

-Susquehanna Animal Shelter: We only have one local shelter and it has provided an admirable and essential service to our County and Towns. County gov't needs to offer regular and predictable financial support. The County established funding for the shelter in 2016 and doubled its funding in the 2020 budget, with Andrew's vote.

Government Reform: "Four years ago, I ran for office because our Town Board was not representing the people.  I promise to always place our residents first and to ignore the parties, personal, and special interests. We must work to make our government transparent, ethical, and accountable. Politicians are not a "special class" and are not above the law. Let's see a return to public service."

-Benefits: Andrew declines to receive all County health insurance, retirement, and travel benefits and supports reducing politicians' perks. Right now, many County Representatives receive generous health insurance benefits, even into retirement. These county benefits are absurd for part-time short-term public service and must be reformed. Andrew voted against the unacceptable 30% raise for County Board Representatives and voted to reduce their health benefits.

-Misconduct: Andrew joined the bi-partisan effort to investigate alleged misconduct in the Sheriff Dept. Nepotism, corruption, alleged threats against our schools, and workplace violence have no place in our law enforcement community. While Andrew was a member of PSLA, it successfully completed the investigation, which resulted in numerous reforms.

-Public Transparency: Andrew voted to open up Board activities to the public. He voted to record meetings and to move meeting times to after-work hours to allow public attendance and allow more people to run for office.

-Term Limits: Andrew supports term limits for County Representatives and a reduction in the number of legislators.

-New Leadership: Andrew voted to support the bi-partisan leadership coalition which included a Republican Chair and Democratic Vice Chair. The spirit of bi-partisan cooperation has resulted in better effectiveness during the 2018-2019 term.

-Cooperation- Residents are looking for cooperation between the parties.When Andrew was on the Town Board, it was comprised of 3 Democrats, 1 Republican, and 1 independent, all working together to get real results. Andrew has also joined the bi-partisan "reformist wing" of the County Board, which successfully came to power last term.

Taxes & Efficiency: "The cost of living and taxes always seem to increase in New York State and it can be hard to make ends meet, especially on a fixed income. We must work to make the government efficient and deliver the most bang for our residents' bucks."

-No Town Tax Increases- Andrew took a stand and voted against the Town budget when it called for increases he believed to be unnecessary.  He has VOTED AGAINST ALL TOWN TAX RATE INCREASES.

-Respect Tax Cap- The County and Town Boards have not surpassed the tax cap. Andrew supports respecting the tax cap.

-No Wasteful Spending- Andrew understands that the public trusts the Town and County to spend taxes wisely and has voted against wasteful spending, even when it put him in the minority. Andrew supports eliminating wasteful spending

-Against Town/City Merger- Andrew agrees with the majority of Town residents that a merger with the City would not be in their financial best interests and would likely lead to hefty tax increases with little benefit. He has resisted City overtures to consolidate but continues to look for ways to increase efficiencies between the two entities.

-Bed Tax & Sale Tax- During Andrew's term, the County has greatly increased the bed tax and sales tax collected from tourists. This allows Otsego County to keep property tax rates lower than almost anywhere in the state. Andrew supports returning a share of these funds directly to the municipalities that collect the fees and bear the burdens connected to increased traffic and tourism.

-Reduce State Mandates- NY State mandates have placed a huge burden on the County. Andrew and the Board have pushed back and urged the state legislature to improve this imbalance and to adequately fund mandates.

-Land Bank- On the County Board, Andrew voted to join a regional land bank that will allow Otsego County to access State funding to repair abandoned and derelict properties and return them to tax rolls, beautifying neighborhoods.

-Tax Foreclosure- Andrew has supported a fair foreclosure process that increases the rights of taxpayers and reduces the profit-taking of the government.

Paid for by Andrew Stammel and by your generous donations.
Powered by CampaignPartner.com - Political Websites
Close Menu